Skip to content
By JillMarch 8, 2019Texas, Travel1 Comment on Barton Springs (with kids) in Austin–plus some spectacular barbecue!

Stop #1 on last summer’s Epic Road Trip was the city of Austin.  One of my dearest friends is from Austin, so I dropped her and her daughter off to visit her family on our way north.  While we were there, they offered to show us a bit of Austin.  But we had such limited time, where would we go?  Having little kids, in the middle of summer in Austin, our choice was obvious–Barton Springs!

Barton Springs was an obvious choice for two reasons:

We were also taken to a fabulous barbecue joint for dinner that evening.  It was so good, I have to share it here, too.

And if we had more time to explore Austin, I would have loved to see the bats taking flight from under the Congress Avenue Bridge.  For those who have time, here‘s a great link to know where to go, what to do, etc. 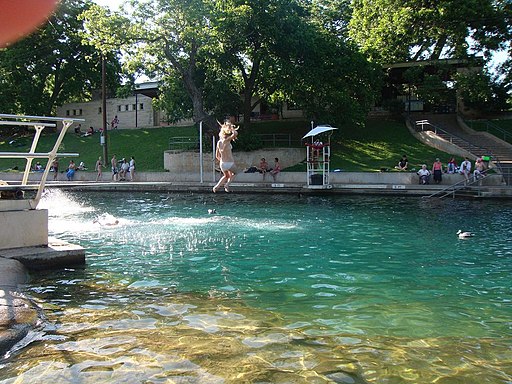 Barton Springs pool is roughly three acres of clear, spring water, which will flow into the Colorado River.  The official pool area is run by the city of Austin, and is located in Zilker Park.  Thanks to the natural springs, the water temperature is about 69 degrees Fahrenheit year round.  I’ve heard of people who come to swim there every day of the year.  I, personally, can’t imagine swimming there in the middle of winter, but kudos to those who do!

Given the length of that pool is, if they swim the whole length of it (and back), they’re in amazing shape.  Those brave souls will never die!

The pool is open almost every day of the year, but during holidays it’s operated on a swim-at-your-own-risk situation (legalese for there are no lifeguards those days).  Is it closed every Thursday, from 9am-7pm, for maintenance.  If you’re planning to come during low season, double-check the schedule here.

From October to March, there is no admission fee.  (Because, really–who wants to swim then, even in Austin?)

There are entrance fees from March 4th until September 30th.

They also offer punch cards and season passes, for those who live close enough to make use of those.  Sure wish I did!

Now, all these fees are for the official entrances and areas supervised by lifeguards.  There is another entrance in Zilker Park where people take their dogs to play in the springs, barbecue on the edge of the springs, and might even go topless.  It is Austin, after all!  If you want to see Austin in all its weirdness, that’s the side to swim on!  (As long as you don’t mind dogs, the smell of pot, and being really crowded.)

On the official, lifeguarded, side, it looks like a regular pool from one side.  A really deep pool, but a pool with ladders to get in and out, and concrete sidewalks.  From the other side, there are rock outcroppings, trees shadowing the water, and you can feel like you are immersed in nature.  Because, let’s face it–you are!  These are natural springs, after all.

There’s a diving board or two, which are well-regulated by the lifeguards.  My kids were interested, but when the lifeguards saw their floaties, we were told, “no way.”  Kids with floaties need to swim at the very far right end (it’s on the right when you’re entering the pool).  Even if I wasn’t toting floatie-wearing children, that’s the area I would have preferred to be anyway.  Most of the pool is about 18 feet deep.  I prefer to put my feet down and stand a bit, which is possible to do from the kiddie end.  The kiddie end also had also had some lovely rock outcroppings.  We could climb up and down them, and they led to a scenic little trail that led around this natural-looking section of the pool.

There’s also a concrete ramp on the shallow end, so those who like to get in gradually can get in that way.

From the shallow end, enjoy a breathtaking view of Austin’s skyline, framed by the trees and Barton Springs.  For those instagrammers who go places just for photo ops, this is a not-to-be missed opportunity in Austin!

Given the gorgeousness of Barton Springs, we were set for the whole day, enjoying this gem of Austin.

But then dinner happened!

Living in Mexico, we have no need of TexMex food when we visit Texas.  In Texas, there’s one thing I want to eat, and it’s barbecue!

Our hosts were happy to obilge, taking us to Stiles Switch Barbecue, on Lamar Boulevard in Austin.

It’s unassuming-looking, on the corner of a strip mall.  The inside was a bit dark, but they won me over even as we were waiting in line.  I don’t know if it was becasue the line was exceptionally long or it was just our lucky day, but while we were standing in line to order, someone came through with a bucket of cold, FREE beer!

Who gives away free beer?

So even if the meal was terrible, I was already mightily impressed. But no–the experience just got better and better!

Truth be told, ordering barbecue gives me some anxiety.  I just don’t know what I want.  (Maybe because I want it all.)  Then I REALLY don’t know what my kids want, because some days they eat like linebackers and other days they decide they’re fasting.  And of course, they never let me know which day it might be until they’ve tasted whatever it is we’re eating that day.

At Stiles Switch, they were linebackers.  It was that good.

We had pulled pork and brisket, french fries, and some kind of pudding dessert that went with the meal (I gave that to the kids.  I wanted to fill up on barbecue).  Already having had one beer, we all had Dr. Pepper.  Because, if you’re not going to drink a beer with Texas barbecue, you’ve got to down it with Dr. Pepper–it’s the official state soda pop of Texas, I believe.

With our bellies full, we drove through the Austin dusk to spend the night with my friend’s family.  While we were passing over a bridge back to their house, we saw a cloud of bats fluttering up, into the dusk.

I got my wish–I saw the bats’ nightly exodus after all!

The perfect end to a perfect day.

Thank you Austin, and an even bigger thanks to the Lee family for having us for one day and two nights!  We loved meeting you all, and really appreciated the time you spent with us!  Thank you so much!

Want some more links to whet your appetite for Austin?

Diving Board Photo by Todd Dwyer on WikiCommons

travelTravel in the US

One Reply to “Barton Springs (with kids) in Austin–plus some spectacular barbecue!”