Disclaimer Two:  This post may come off sounding negative about Jehovah’s Witnesses–that is truly not my intention at all.  After years of study with some wonderful Jehovah’s Witnesses, I have a tremendous amount of respect for their beliefs and the organization.  However, we don’t agree about everything.  This post is meant more for “mainstream” Christians who are wondering how to defend Trinitarian theology, particularly when faced with well-organized and well-trained Jehovah’s Witnesses on the subject.  Let’s face it–we’re just not as organized!  But, for any Jehovah’s Witness who may stumble across this post, I believe that you’re following Jehovah to the best of your understanding and ability, just as I’m following God to the best of my understanding and ability.  We don’t agree on everything.  But God knows our hearts, and knows why we believe what we believe.  God’s opinion is really the only one that matters on the subject.  If we’re truly seeking to follow his will, he’ll lead us where we need to go.

As I mentioned a few months ago, I’ve been meeting with a Jehovah’s Witness missionary regularly for a few years.  At first, it began because my Catholic friends would comment about Protestants.  As my neighborhood’s “Protestant Expert”, I dispelled common myths, accentuated similarities, or explained why Protestants just don’t understand some Catholic quirks–depending on the situation, of course.   But, more often than not, my neighbors were looking for information on Mormons or Jehovah’s Witnesses.

Well, shoot–I can’t help you there!

Jehovah’s Witnesses would regularly leave pamphlets on my gate, and after reading them, it was clear that they believe in the Bible and it’s message.  So why was it that “mainstream Christianity” claims that they’re not Christians?

They don’t believe in the Trinity.

That whole “three being one” trips them up a bit.  I can’t say I really blame them.

But I do believe in the Trinity.  And, thanks to trying to biblically defend the Trinity on a variety of occasions, I have found a few resources that have clarified my understanding of the Trinity.  There’s the irony–in trying to dissuade me from believing in the Trinity, my Jehovah’s Witness friends have inadvertently strengthened my faith.

Well, maybe not so inadvertently.  After all, my main Witness friend says, “we need to really examine what it is we believe and WHY we believe what we believe.”  That, and the Jehovah’s Witness trademark of being able to be articulate their faith!  It really can’t be overstated the importance of being articulate on what matters most to us. 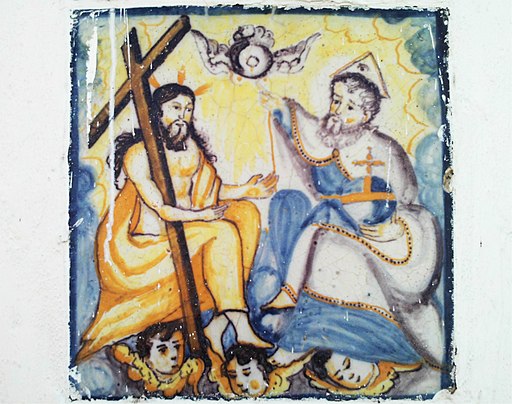 First of all, it might be helpful to familiarize yourself with the Jehovah’s Witness stance on the Trinity, if we’re going to try to defend it.  What exactly are their objections with it?  There is a wealth of information at the official Jehovah’s Witness website (jw.org).  For information specifically on the Trinity (or their objections to it), check out “The Truth About the Father, Son, and Holy Spirit.”

One thing that I’ve noticed that Jehovah’s Witnesses get hung up on is the fact that many mainstream Christians claim that the Trinity is one God and the Father, the Son and the Holy Spirit are simply three different manifestations of that God.  I believed that myself.

It turns out that pretty much every Christian denomination officially agrees that the Father, the Son and the Holy Spirit are three separate entities (“people”, if you will).  So when we say that those are just three different manifestations of the One God, we’re slipping into a heresy called Sabellianism or Modalism.

(Are you eyes glazing over yet?  So sorry–that’s the last time I’ll throw around trigger words like “heresy”–at least today!  But it is pretty alarming that so many of us hold a heretical view of God.  Whoops!  I did it again!  Honestly, the modalism creeping into modern Christianity is a huge topic in itself.  But that’s another post for another day.)

So it’s a good thing that Jehovah’s Witnesses are calling us out on that one, as many of us are (probably inadvertently) holding unorthodox beliefs!

But, of course, there’s more to explaining–and understanding–the Trinity than overcoming modalism.  Read on!

Those Resources I Promised!

In the earliest stages of my research into the Trinity, I stumbled on Paul Pavao’s site, Early Christian History.  I was looking for information on the Nicene Council, where the Trinity was first officially defined.

It’s a very accessible site and reader-friendly, which is marvelous as it deals with topics that aren’t usually found in a reader-friendly format.  (Thanks, Paul!)  I searched all over his site, and I finally decided that I needed even more answers, so I bought his book, Decoding Nicea.

was also written to be read by the general public, and really drove home the point that one of the most important goals of the early Church was pass on Christian teaching EXACTLY as it was handed down from the apostles.

For those who grew up Catholic or Orthodox, that may come as a no-brainer.  But for those of us who grew up Protestant, we got accustomed to the idea that shortly after the Book of Acts was written, the early Church got screwed up right quick.  Do you know what the most convincing part of Pavao’s arguments are?  He himself is neither Catholic or Orthodox.  So he’s not just touting the official Church line because he believes in the authority of the Magisterium (or the Orthodox equivalent).  No–from his comments, he´s not a huge fan of the Roman Catholic church (or the Orthodox churches).  But Paul Pavao appears to be a passionate scholar of the early Church.  (He includes some great links on where to find Early Church Fathers’ writings online.)

And–for Catholics reading this–even though his personal views sound like they’re pretty skeptical about Roman Catholicism, there isn’t much that he says that actually goes against official church teaching.

Search the internet for biblical means of defending the Trinity, and there are a number of people who have published long lists of “proof texts”.  These are great.

This is a complicated issue!

Jay Hess wrote a paper for the Evangelical Theological Society in 2004 which is fantastic in that it doesn’t just throw around a bunch of Bible verses, but dives into the philosophy and psychology of Jehovah’s Witness theology.  As a former Jehovah’s Witness, Mr. Hess knows what he’s talking about.

He addresses points that would never occur to most of us, like all the “I AM” statements that Jesus makes in the Gospel of John.  We see those as proof texts.  “See–Jesus is calling himself the I AM–just like God!”

However, Jehovah’s Witnesses don’t see it that way.   It is clear to them that God’s name is Jehovah.  Not the I AM.

Well, shoot.  There I go, back to square one!

Haven’t found the paper yet?  Click here!  Give it a read–he’s got other ways of making the Trinity make sense, or at least be plausible, in the face of Jehovah’s Witness theology.

Even if proof texts may not convince any Jehovah’s Witnesses of the truth of the Trinity, they’re marvelous at reminding us Trinitarians the scope and the depth and the hugeness and inclusiveness of God.

Joel S. Peters published this list.  Unlike most lists of proof texts, this one comes from the New World Translation–the translation published by Jehovah’s Witnesses.

And–let’s face it–proving anything about the nature of God is largely out of our hands and quite comfortably in the hands of God . . . so let’s all rest in that–whatever our beliefs on the Trinity may be!

Best Book on the Trinity

Last year around Trinity Sunday, when I was up to my neck in researching the Trinity, a pertinent thread appeared on a pastor friend’s facebook page.  Knowing that his posts were followed largely by pastors and theologians, I asked for a recommendation for resources on understanding the Trinity.

Overwhelmingly, all these pastors and theologians agreed that The Divine Dance by Richard Rohr is the best book out there on the Trinity.  It was also written to be read by lay people, so it avoids all those five-syllable theology words!

Now, this book will do nothing to convince a skeptic about the truth of the Trinity.  But for those of us who already believe–even just a little bit–it is every bit as fabulous as those pastors said it was!

In a nutshell, it describes how the Trinity is the relationship between the Father, Son, and the Holy Spirit–and that we’re included in it!  He notes how there are a lot of similarities between the structure of atoms (also made of three separate parts) and the Trinity.  If that bond is broken between the particles of an atom, what happens?

Thank goodness the bond can’t be broken between the persons of the Trinity!  But the strength that joins them together is even more powerful.

(Honestly, gotquestions.org is just a fantastic site for so many Christianity questions!)

This last one is a downloadable study guide published by the Jehovah’s Witnesses, to be used in conjunction with their booklet “What Does the Bible Really Teach?”  This is a fantastic worksheet to help students explore what it is we really believe, why we believe it, and how to articulate that belief.  Like any good debate teacher would say, we need to understand the other side’s viewpoint to be able to effectively express our own.

The Goal is Understanding, the Hope is Unity

Not that we as Christians should be divided into “sides”.  We know that we’re breaking God’s heart when we do that.  But when Christians disagree, it is important to understand where these disagreements come from and why.

Just because we understand someone else’s point of view does not mean we need to adopt that view.  St. Paul, of course, has some pertinent advice:

“Welcome anyone who is weak in faith, but not for disputes over opinions.  One person believes that one may eat anything, while the weak person eats only vegetables.  The one who eats must not despise the one who abstains, and the one who abstains must not pass judgement on the one who eats;  for God has welcomed him.  Who are you to pass judgement on someone else’s servant?  Before his own master he stands or falls.  And he will be upheld, for the Lord is able to make him stand.  For one person considers one day more important than another, while another person considers all days alike.  Let everyone be fully persuaded in his own mind.  Whoever observes the day, observes it for the Lord.  Also, whoever eats, eats for the Lord, since he gives thanks to God; while whoever abstains, abstains for the Lord and gives thanks to God.  None of us lives for oneself, and no one dies for oneself.  For if we live, we live for the Lord, and if we die, we die for the Lord; so then, whether we live or die, we are the Lord’s.  For this is why Christ died and came to life, that he might be Lord of both the dead and the living.  Why then, do you judge your brother?

Then let us no longer judge one another, but rather resolve never to put a stumbling block or hindrance in the way of a brother . . . if your brother is being hurt by what you eat, your conduct is no longer in accord with love . . . let us then pursue what leads to peace and to building up one another.”

Again, I’m proposing understanding one another–and better understanding our own faith–so that we all can better glorify God and become the people God wants us to be.