Skip to content
By JillNovember 21, 2018Uncategorized7 Comments on What To Do in Aguascalientes, Mexico

Since we had a long weekend recently, we decided to get out of town.  Go somewhere new.  Get off the Highway 57 corridor.  *gasp!*

My husband visited Aguascalientes when he was young.  He saw his first bullfight there, so the city has long held a special place in his heart.  It´s a well-preserved, colonial city that we´ve been meaning to visit for years.  The bullrings called his attention.  The hot water in its name called mine.  Finally, we had time to explore Aguascalientes.

It´s a five-to-six-hour drive to Aguascalientes from Saltillo.  Head towards Zacatecas and then follow signs to Aguascalientes.  It´s a long, uneventful drive.  Don´t do it at night, and keep your gas tank full, as the gas stations are far and few between.  There might be one about every 40 minutes.  Of course, don´t drive at night. 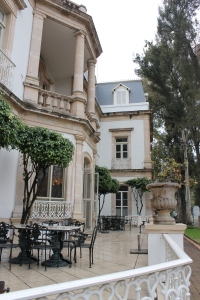 We reserved rooms at the Gran Hotel Alameda.  It´s farther out of town than we usually prefer to stay, but the hotel description intrigued us.  It gave us hope that they had a hot tub.  We were wrong.  However, they have an excellent attached restaurant.  The service, both in the hotel and restaurant was impeccable.  And, had we been there on a warmer weekend, we would have taken advantage of their pool and been temped to pretend that the Gran Hotel Alameda was a resort.  It would have been easy not to leave the hotel.

But we did.  After all, we came to explore Aguascalientes.

After an amazing spread at the hotel´s breakfast buffet, we drove downtown, ready to explore.  Parking is plentiful at the Expo San Marcos, with an entrance under a bridge on Adolfo Lopez Mateos–unless the fair is going on.  If you come for the fair, stay right downtown and don´t get in your car again until it´s time to leave town. 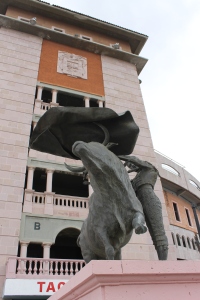 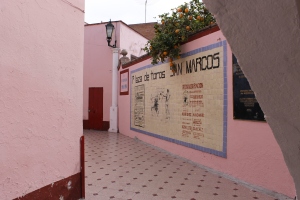 This fair is the nationally renowned Feria San Marcos.  It takes place from mid-April to mid-May, and you need to have hotel reservations at least a year in advance.  Bullfights and beer appear to be the name of the game.  To our disappointment, we missed a bullfight on Saturday night and were not able to stay late enough on Monday to see one then.  However, we wandered the outside of the big bullring, and were able to wander inside a much smaller one. 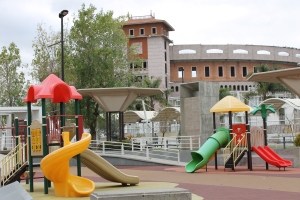 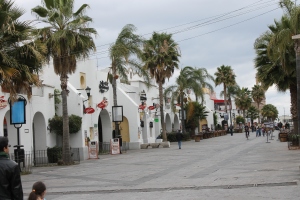 To our kids´relief, Aguascalientes has an excellent playground right outside of the big San Marcos bullring.  After they ran off their energy, we dragged them through the Andador J. Pani, a complex of bars and restaurants that I´m sure are hopping when the fair is going on.  In fact, the longer we stayed, it looked like they pulled in a reasonable business on a long weekend in February. 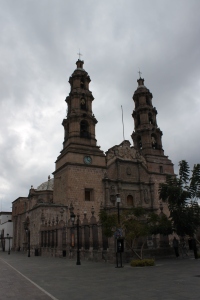 We could have walked all the way downtown, to appreciate historical Aguascalientes, but our kids’ legs and attitudes demanded that we move the car closer to downtown.   Like San Luis Potosí, Aguascalientes has always been an important connection between northern Mexico and Mexico City.  Its strategic position between Zacatecas’s  silver mines and Mexico City made it an important stopping place for wealthy silver caravans headed to Mexico City.  The downtown area has various museums and is very walkable. 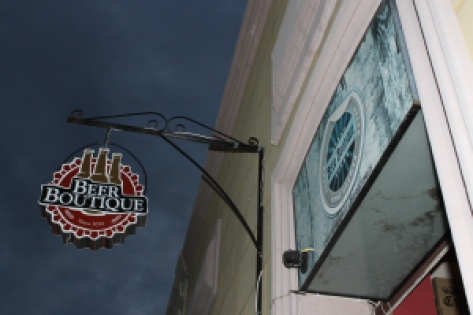 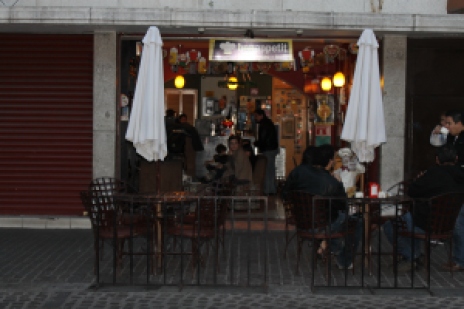 However, what called my attention were two bars on Venustiano Carranza.  Peeking in, I noticed a large display of microbrews, many of them from Mexico!  Given that microbreweries have taken off like wildfire in the US in the decade or two, I’ve been sorely disappointed that Mexico’s beer is still dominated by two or three huge companies.  If you’re equally sad about that, Aguascalientes has the locally-brewed solution for you!  In fact, from the briefest of searches, it seems that they have a couple of breweries.  My next trip there may just be called, “The Aguascalientes Beer Quest”.  I will certainly revisit Bon Apetit and the Beer Botique and pick the staffs’  heads about the Aguascalientes beer scene.* 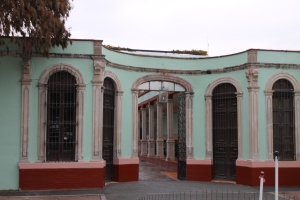 Monday morning dawned cloudy and cold with a very real chance for rain.  However, we were determined to check out the hot springs at Ojocaliente, just across the street from the hotel.  As it was a national holiday, and we had to make that five-hour drive back home before dark, we were the first to hit the hot springs.

Now, when one thinks of hot springs, one usually thinks of sitting out, under the sun, in gloriously warm, naturally heated water, right?  Not the case here.  Ojocaliente has a number of private, enclosed pools that are rented by the hour.  Open the tap, steamy water begins pouring into the tub, and a half hour later, it is filled to capacity.  When the water starts to lose a bit of heat as time passes, open the spout again, and let the steamy warmth pour on your head, down your shoulders.  Bliss. 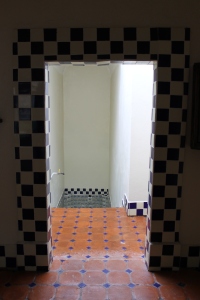 For extra enjoyment, take breaks from the hot tub.  Run to the shower provided in the private room, stand under the cold water (yes, not for the faint of heart), tighten up all those muscles, and then immerse yourself back in the hot tub.  They´re big enough for one or two people to float on their backs at a time.  If you have more time than we had, they also offer massages for an extra price.  And they don´t mind at all if you add bath salts to the water–in fact, they´ll be happy to sell you some when you rent your hour. 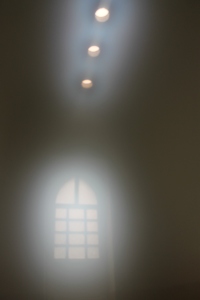 I don´t know how crowded Ojocaliente might get during Semana Santa, when everyone has vacation.  But on a cold, rainy day in early February, we just about had the place to ourselves.  And yes, this is a child-friendly establishment.  They have play equipment at one end of the interior courtyard, sell floaties for anyone who would like to purchase them, and the water is not too hot for little peoples´ sensitive skin.

We had one more excellent meal at the Gran Hotel Alameda.  With cream of olive soup, grilled lamb and roasted salmon on the menu, why would we eat anywhere else? 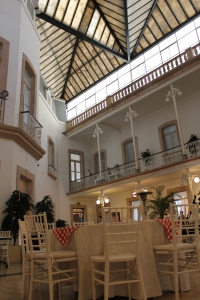 That long weekend was just long enough to convince me that I need to see more of Aguascalientes.

This article was originally written almost 3 years ago, and–mercifully–Mexican microbrews are becoming quite common all over the country.  But as Aguascalientes already had their foot in that door years ago, I’d love to go back and see how their microbrew scene has evolved.  That, and I’d like to see if I can get my hands on a Reina Roja.  It’s a red ale, and it’s nothing short of amazing.  I’m been dreaming about it for the last three years!

7 Replies to “What To Do in Aguascalientes, Mexico”