Skip to content
By JillDecember 19, 2018MexicoLeave a Comment on What is in a Christmas Market in Saltillo, Mexico?

For any holiday in Mexico, street corner vendors take over, hawking flags for Independence Day, Guadalupe statues for Guadalupe Day, fake mustaches for Revolution Day, and team jerseys for the football finals–because that’s as big a holiday as any in Mexico!

Christmas in Mexico is no exception.  But instead of merely just the street vendors hawking Christmas trinkets, entire plazas get taken over and turned into a veritable Christmas market.

What will you find at a Mexican Christmas market?

Throughout Mexico, the national obsession from mid-December to the 2ed of February  is arranging enormous nativity scenes.  As I mentioned in an earlier post, I’m convinced that there’s an unofficial competition among all the Mexican grandmas as to who has the most elaborate Nativity Scene.  These things literally take over the large part of most living rooms!

(If anyone has a photo of a spectacular one, please share it in the comments section.)

Where to all these abuelitas get the figurines for their Nativity scenes?  At the Christmas market, of course!  There are rows and rows of baby Jesuses, Wise Men, Angles, cows, shepherds, Marys and Josephs . . . plus ladies making tortillas, old men roasting goats, and Satan.

Because every Nativity scene needs a Satan, right?  (Well, they do in Mexico!)

They also need stables to house Mary and Joseph, and moss for them to rest on.

Christmas trees are popular in Mexico, too.  Mexico is quite mountainous, so one doesn’t have to go far in order to find a decent pine forest.  But most trees are imported, so check with the seller if you’re dead-set on finding a locally-sourced one.

Unless you live on the coast.  Then you’re out of luck, and they’re all likely imported.  But those probably all come from Christmas tree farms, so that’s a good thing, too.  (Here’s hoping that domestic trees come from tree farms.  On the books, cutting down trees is well-regulated in Mexico.  But like with most laws here, it’s questionable how well those laws are enforced.)

And there are plenty of people at the Christmas market selling lights to put on that tree!  Good luck finding a strand that doesn’t play annoying music.

A quality Mexican Christmas market will have stands selling ponche and champurrado–and if there’s champurrado, there’s likely tamales, too!

What is ponche and champurrado?

Ponche is a hot, fruit punch, made from apples, guavas, tejocotes, sugar cane, cinnamon, and piloncillo.  It’s just marvelous, and very seasonal.  Part of the ponche magic is eating the fruit along with the drink, so ponche should be served with a spoon or fork.

Champurrado is basically hot chocolate, fortified with tortilla dough.  It may sound weird, but it tastes amazing.  That extra thickness from the dough makes it even thicker, so it’s more of a stick-to-your-ribs kind of drink than normal hot chocolate. 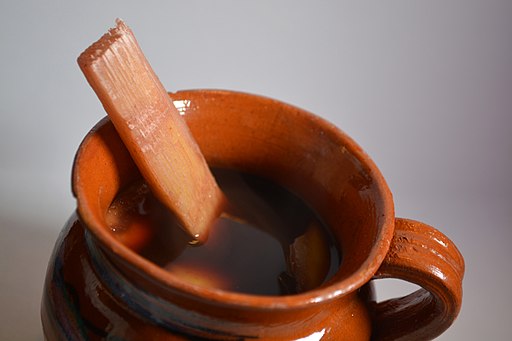 Unfortunately, my market in Saltillo didn’t feature any hot drinks sellers.  But if you’re exploring in Saltillo, you don’t have to go far for a decent champurrado.  Head up toward the San Francisco church, and take a left at the corner of Juarez.  Compadre’s restaurant has a good café de olla, but if you’re in the market for champurrado, head a few doors farther down Juarez to the Cafeteria y Hotel Doña Ofelia–well, it’s Doña Somebody-or-Other, but Ofelia sounds about right.  Anyway, their champurrado is excellent.  (The tamales are just OK.)

Or there are plenty of other hot drink/tamal/gordita options right behind the cathedral, on the corner of Calle Bravo and Juarez, and around the Plaza San Francisco.

Where’s the Christmas market in Saltillo?

It’s in the Plaza Francisco I. Madero, on the corner of General Cepeda and Emilio Castelar, just a block behind the cathedral.  (And about half a block to the left of the cathedral, if you’re facing it.  Or, north of the cathedral, for those who can process cardinal directions.)

Don’t get Plaza Francisco I. Madero confused with Plaza San Francisco.  That’s just a block up the road.  Or, if you get to Plaza San Francisco, walk down the street (literally, down–this is Saltillo, and the city was built on a hill) and you’ll find it sooner than later!

If you’re elsewhere in Mexico, poke around any historic city center, and there is bound to be a Christmas market somewhere.

Photo of Woman Making Ponche by JEDIKNIGHT1970 from wikicommons

Photo of Mug of Ponche by ProtoplasmaKid from wikicommons