Skip to content
By Jill DouglasJune 22, 2018Faith LifeLeave a Comment on The Eucharist: Believing and the Implications of Believing

The Eucharist is–hands down–the reason I’m Catholic.  To be honest, as a convert, there are still some things about Catholicism that I have a real hard time getting  behind.  But, once I believed in the Eucharist, and understood the implications of believing in it, I was sold.

After Jesus explained the Eucharist in John’s gospel, he lost a lot of followers.  Jesus turned to Peter and his other remaining disciples and asked them, “´Do you also want to leave?’  Simon Peter answered him, ´Master, to whom will we go?  You have the words of eternal life.´” (John 6:67-68)

That sums up my relationship with the Roman Catholic church.

I believe in the Eucharist.  Where else can I go?

As Methodists, this also gives us certain liberties.  My favorite is that the United Methodist Church believes in open communion.  As the pastor always says before distributing the bread and grape juice, “you do not have to belong to this church or to any church in order to partake.  Come as you are.”  There is no age limit, so children of all ages are welcome to fully participate, deepening their faith as they physically remember Jesus’s sacrifice.

Just as grace is freely poured out to all who wish to receive it, so is communion in the United Methodist Church.

I understand and respect the reason for the Roman Catholic Church’s closed communion.  St. Paul says it best in 1st Corinthians:

“Whoever, therefore, eats the bread or drinks the cup of the Lord in an unworthy manner will have to answer for the body and blood of the Lord.  Let a man examine himself, and so eat of the bread and drink of the cup.  For anyone who eats and drinks without discerning the body eats and drinks judgment on himself.”

But, deep in my heart, it is hard for me to swallow.

The history of the United Methodist Church in the United States gives today’s churches some interesting quirks.  For instance, back in the day, pastors were overseers of a number of churches, so they’d go around, visiting the churches about once every six weeks.  They were referred to as “circuit riders“.  That meant that once every six weeks, communion would be served in the Methodist churches.  Because, “Hey–Pastor’s here this week!”

However, this custom stuck throughout the 20th century, even in churches that employed full-time pastors.  They still served communion once every six weeks.  This changed a little when I was an adult, and how the UMC celebrates communion once a month.

I always loved the communion service.  The rituals, the responses, the loaded symbolism–I was ripe to convert to Catholicism, wasn’t I?  I like to think of the UMC as “liturgy light”, and they gave me a fantastic foundation.

So when I attended a Lutheran university and found out that they celebrate communion every single week, I was sold.  Then I found out that Catholics celebrate it every day.  It just gets better and better!

I can see how taking a leap of faith from believing in a purely symbolic communion to believing that the Eucharist is actually the body and blood of Christ could be really difficult for a lot of people.

However, I never had issues with that.

Growing up, my best friend was Catholic, so we were invited to her First Communion.  When the kids were lining up to receive the Eucharist, I remember my mom leaning down to whisper to me, explaining that Catholics believe that it’s really the body and blood of Christ.

I took that in at face value, thinking, “OK–who am I to tell God who he wants to be?”

To be honest, from that moment, I believed in the Eucharist.  Of course, I had no problem going back to my symbolic Methodist communion.  My thought was, “if they want to do it that way–great!  If we do it this way–great!”  That’s only slightly changed over the years, and now I believe that when traditions that believe the communion in their churches is purely symbolic, then it IS purely symbolic (in those churches).  But after diving into the 6th chapter of the gospel of John, I believe that Jesus really wasn’t mincing words when he said that “whoever eats my flesh and drinks my blood remains in me and I in him.”

Whichever way we believe, God knows our hearts and why we believe what we believe.  God is the only one whose opinion matters, and if we’re seeking his will, I’m convinced that we’ll find it.

In my last years of college, up through my mid-twenties, I was seriously exploring Catholicism.  As mentioned above, I never had a problem with believing in the Eucharist, and in other areas it was increasingly clear that Catholicism was for me.  I attended mass regularly, and although I couldn’t participate fully, I was getting ready.

One day, I was in the Cathedral in Puebla.  I was sitting in a pew, soaking up the beauty surrounding me, the light filtering in from the windows high above me, the heaviness of the thick, gray walls, red flames dancing in the lit candles at a side altar.  Mass was about to start, and I was ready.  Then the priest came down the center aisle, holding an ornate, metal sculpture high over his head.  Everyone else in the cathedral fell to their knees, clearly worshiping this metal sculpture. 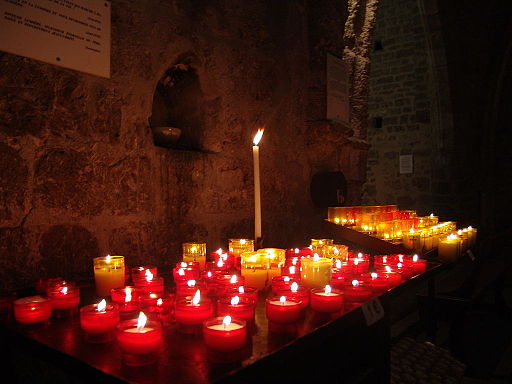 I sat down, crying, wondering how a group who was pointing me to God, who was answering my questions so well, was now clearly worshiping something man-made.

I was just about absolutely convinced that Catholicism was the way to go.

Then this happened.  I couldn’t see anything but outright idolatry.

All nuances in my faith that been building up for years shattered on the ground in that cathedral in Puebla.

It turns out, the “ornate metal sculpture” that so offended me was a monstrance.

A monstrance is a sculpture with a window in it.  In the window, a priest places a consecrated host (the body of Christ), and it remains on the altar of a church for a period of adoration.

They weren’t worshiping the monstrance.  They were worshiping what was inside–they body of Christ.  Or, better said, Christ himself.

In that case, it was perfectly acceptable for everyone to fall to their knees in worship.  After all, in the presence of Christ, is there any other appropriate response?

In recognizing our insignificance in light of Christ’s sacrifice for us, we’re also raised up, elevated to a position much higher than what we’re actually worthy of.  If Christ is King of the Universe, and died for us . . . how important does that make us?  It’s startling.  Not because of who we are–we’re pretty insignificant in the grand scheme of things.  But if the King of the Universe loves us that much . . . that’s just awe-inspiring.

So hit the floor.

Then what’s the only thing he asks us to do?

So I’ll practice first, by making my knees hit the floor whenever I’m confronted with his presence.